Read this entertaining recap of the last Jersey City Dad's Meetup, and plan to attend the next one - on May 12th, 2018 at 4:30pm at Zeppelin Hall!

About the author: Collin Imhof lives in Jersey City with his wonderful wife and daughter.  He is an affable raconteur, propitious attorney, and au courant cocktail connoisseur.  He recently purchased a thesaurus. Follow Collin on IG: @thecollinsglass

Zeppelin Hall, Jersey City’s sprawling German-style beer hall, was a fitting venue for our inaugural local Dad’s Group meetup.  Sure, the ramp outside led only to a locked door, but we hale and hearty lads were happy to muscle our strollers up the front steps. I was even a bit surprised to find a changing station in the men’s room.  It’s a biergarten, not a kindergarten.  And that was just fine with us.

The turnout numbered about 20 or so dads ranging from their late twenties to early forties.  Most of us had one child, with surprisingly more girls than boys, spanning single- to double-digit months in age.  Some of us had seen a post on Reddit. Others others heard it second-hand from their partners in the Jersey City Mommas Slack group.  Word had spread. When we arrived, a few of us were already familiar with each other from playdates, classes, or just the outs and abouts in JC.  We were a mix of full-time professionals and full-time dads. The organizer, originator, and original poster for the group, Hunt Ethridge, is himself a stay-at-home dad and long-time local.  In this city of transplants, that practically makes him a native.

Hunt and his daughter situated themselves in the back room.  The rest of us slowly trickled in. It’s easy to spot a dad’s meetup: just follow the sidelong glances and raised eyebrows.  The crowd at Zeppelin Hall genuinely seemed surprised to see so many children accompanied only by men.  Naturally, when a parade of strollers rolls through a beer hall, you expect a few puzzled looks and maybe even a little judgment.  (I mean, who brings a baby to a bar?) But then came the well-meaning yet patronizing attaboys:

“You’re doing a great job,” one woman cheerily told me, apropos of nothing (I hope) when I made my way back from the bathroom.

“I love to see dads stepping up,” a bartender told me later.  I presume she did not mean stepping up to the bar with my seven-month-old in tow.

Nonetheless, we felt right at home.  There was ample room to accommodate our wagon-train of strollers, and the long pine benches made it easy to mingle, entertain the little ones, and rest our Ergo-babied backs.  Beer by the liter certainly helped to grease the conversation.

I overheard a few of the guys talking about school quality, and I joined a conversation about traveling with infants versus toddlers.  Discussions about nap schedules ebbed and flowed in rhythm with our kids’ crankiness. Carriers came out, both structured and soft-sided, and we debated the merits of each.  We gushed over the simple joy of our babies nestling into our chests. Some dads shyly snuck off into corners to feed their little ones, while others just whipped out the milk (in bottle form) right at the table.  The walkers toddled between our legs while we chatted. My own daughter munched happily on a peanut puff.

As the afternoon wore on, we slowly began to confide in each other our whispered worries.  We opened up about concerns over everything from waitlists to weight percentiles.  Were we doing enough? What do you think about screen time? Is it bad if the baby still sleeps in our bed?

Apprehensions that, perhaps, some of us had been bottling up.

There’s this weird, accretive pressure on men to be strong all the time, even in the face of incredible anxiety-inducing hardship.  If you’re not feeling particularly tough, you fake it till you make it. You wear your stoicism like a tin badge of honor. “No pressure; no diamonds,” noted Scottish philosopher Thomas Carlyle.  Trouble is, all this faux grit has an insidious consequence: men, despite going through shared tribulations, often will feel utterly alone.  While our forefathers might’ve cut an aloof and impassive Marlboro Man, all we’ve managed is the loneliest of Lone Rangers.  This is especially true as sleep-deprived new dads.

The old rules don’t seem to make sense anymore.  Time was, men would potlatch cigars in the waiting room and could die having never changed a diaper.  Today, we hold our partners’ hands and we get right in there for the blowouts. I want to be an engaged and involved parent to my daughter, and I believe a lot of these guys want that for their kids too.  It’s not “stepping up,” it’s just being a dad.

It was nice to talk to someone about that.

We gathered email addresses, took pictures, and discussed how often to gather.  Whether to meet again was, of course, a foregone conclusion. This was healthy and useful and fun.  As Hunt stated, “Obviously, there’s a need and desire for this.” He was right.

We’re heading back to Zeppelin Hall at 4:30 on May 12.  If you’re a dad in the Jersey City area looking to get out with your little one, discuss your concerns, or just hang out, come join us.  Plus, you can drink a beer that’s bigger than your kid and people will tell you you’re doing a “great job.” 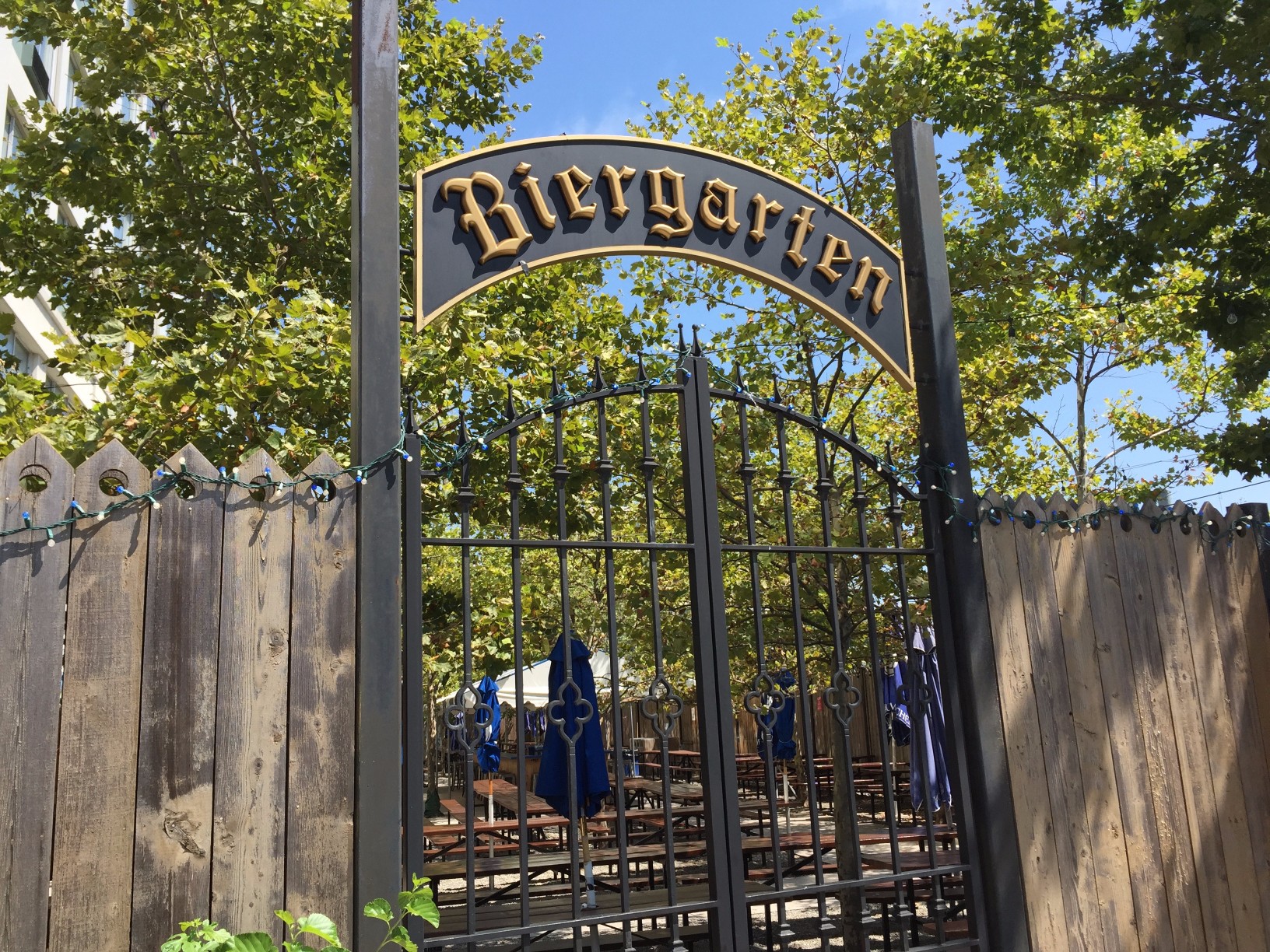